On the first Monday night, we went to watch Celia give a presentation at the Southern Cross resort. Her talk was on a major part of her research: bioaccumulation of mercury in marine fish, and how mercury can be harmful to humans. There was a turnout of about 40 or so (including the lot of us from CCMI), and it was nice to get some exposure to what Celia does.

One of the biggest differences between our time on Little Cayman and our time in Costa Rica is that even though we’re still pushing the pace, and everyone is still super busy, we’re all less stressed out.  Maybe it’s the amazing weather, or that we’re not constantly on the move from one station to the next, but I think all of us feel a little more relaxed. It’s largely due to Celia herself, who has been an amazing presence for us.  She is an absolute sweetheart, always putting us first, and acting so motherly the whole time. She’s also been working just about as hard as we are, driving us to and from our data collection locations, putting together and delivering her lectures, editing our papers, and doing anything else she could to make our time easier. Every morning, she’d get up at 6:30 to go on a walk, and happily invited us to come whenever we pleased (and were willing to wake up 45 minutes early). 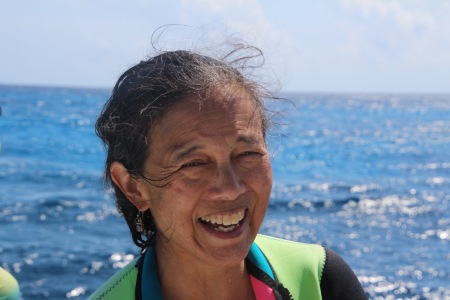 On one such morning walk, Celia noticed something large and rubbery washed up on the shore. She was startled when she approached it: a 4-foot long, freshly dead Caribbean reef shark! Later that day, Robbie, Jalen, Beth and I went back to pick up the beaut and bring to the lab. Why? To figure out the cause of death, measure it, and, yes, dissect it. Surprisingly, my first dissection! We cut out some skin, liver, and brain samples to bring back to Hanover so Celia could run mercury-content analysis on them as well.

*Note: we found this shark dead on the beach before bringing it back to the station. Our group, as well as CCMI, had nothing to do with the death of this shark.

This is a special time of year on the island, we’ve discovered. Every January and February, Nassau Grouper from all over the Caribbean swim in droves to the Cayman Islands, for an annual spawning aggregation. Pretty cool that they come that far, but what makes it even more special: the species is endangered, and the aggregation on Little Cayman is one of the last large ones left. It usually consists of about 2,000 fish, off the south end of the island. The grouper used to be heavily fished, and this spawning aggregation used to have 5,000-6,000 fish total.  But since the fish’s protection in 2006, the population has rebounded.

So in the winter, marine biologists flood to the island to investigate the spawning behavior — which we still know very little about. Just after dusk during a full moon, females swim up towards the surface, shooting thousands of eggs into the water, and up to 50 males follow along here, ejecting sperm in hopes of fertilizing her eggs. Here’s a short video of it*. Tom and Allie, both working at CCMI, harvested some of the grouper eggs in an attempt to raise them in the lab at the station. A bunch of us would’ve died to go check out the spawning one of the nights it occurred, but attendance at this amazing phenomenon is restricted to professionals.  Some day.

*That link up there is to a video on Guy Harvey’s youtube channel. You know who Guy Harvey is?  Well, me neither initially, but I figured out he’s the guy (ha) who paints all those amazing illustrations of marine fish that frequent the shirts of sport fishermen.  I bring it up because one day we were typing away on our papers, when Guy walks into the classroom.  He was touring the station and stopped in to say hi. Yasmeen and Robby were pretty starstruck to meet him.

A few highlights of the diving:

We’ve seen plenty of sea turtles, at least one every day.  All green and hawksbills I believe, beautiful creatures.

After the spawning was complete, you’d see the Nassau Grouper all over the reefs.  A lot of them are super friendly, and follow divers in hopes of nabbing a speared lionfish (they learned quickly of the weekly lionfish culls).

Probably the best dive was on Great Wall.  Besides the sheer awesomeness of the wall itself, there were a few very cool things we saw on that dive. I mostly took videos underwater, and because you can’t post anything but photos here we’ll have to settle for screenshots. The first feature of the dive was right in the beginning, just as we descended off the wall. I could hear Greg banging on his tank with a carabiner (typical signal for “look at me”) up ahead, but Beth was having some trouble equalizing so I didn’t pay it much mind. But the banging continued, so I finally turned to see.  Greg was now pointing back towards us — at a massive moray eel right below me! Nocturnal creatures, they’re rarely seen free-swimming, so this was quite a treat. But it gets better: as we watched, the moray approached a smaller grouper behind us.  The grouper stared back at it — and then turned and began to nuzzle the eel! I stared, awestruck, as the two of them then swam off together. Many marine predators have mutualistic relationships in which they will hunt in tandem, increasing the chances that they will scare something out of hiding.  And apparently this is not uncommon with morays and grouper.  Wow.

But the dive only improved: not 50 meters later, Robbie pointed out a massive nassau grouper.  It was floating right next to the wall, so we had a great chance to swim up to it. As we got closer, we noticed it appeared to be stuck on something — or something stuck to it? I filmed the grouper, but after noticing that we were falling behind the group decided to keep moving. Robbie told me afterwards what he thought was wrong with the grouper: it had an octopus attached to it! What? Always skeptical of Robbie’s tall tales, I found that hard to believe. But Celia had stayed behind to check it out longer.  And as she watched, the grouper finally swam out into open water — with the octopus still attached! Absolutely INSANE.

Much of our day-to-day is dictated by the wind: we can only dive on days when it’s pretty calm, and the wind determines where on the island we should go for our projects….and the damn sand fleas that plague the station only swarm on calm days. Those buggers have been the bane of our existence, coming out in the late afternoon to eat us alive during dinner. You’d think you’d be safe inside a screened porch, but they can fit right through the screening and zero in on us while we’re vulnerable. So it was not uncommon to see us fully clothed past 5pm. Poor Yasmeen and Aldo had it the worst; if only I had a picture of Yasmeen stuffed inside her pants, jacket, scarf, hood, and beanie.

Every Friday, we had a routine of having one “weekend” night — by going to karaoke. FSP groups have been going to this karaoke for years, and we were always the life of the party at this one event of the weekend on the island. So we’d roll up in bulk to the Little Cayman resort bar, as tourists and locals looked on at the college kids strutting in. With four of our girls members of a capella groups, there was some talent among us. But the rest of the group knew how to have a good time too. 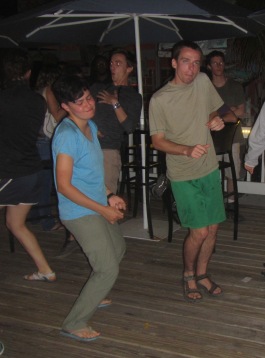 As Celia said to me: “It was such a great surprise to have students like you and Polashenski, who were always so intense academically, go to karaoke and be such goofballs!” 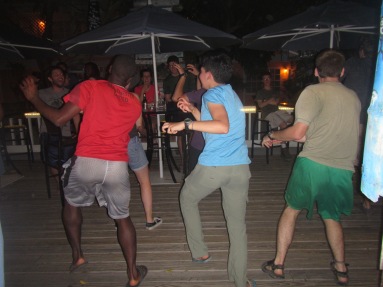 Polish and myself, among many others, were pretty fuego at karaoke. Some golden songs performed: 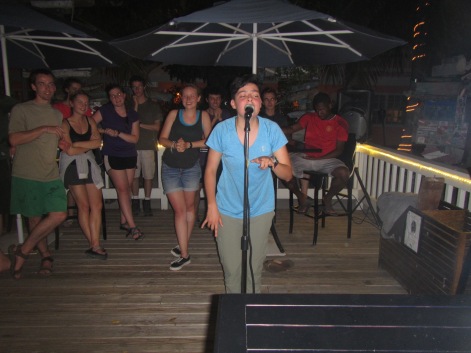 A week before we left, the Southern Cross Resort held an Oscars viewing party. It was basically a big excuse to all dress up nice and have some drinks. I initially wasn’t going to go — it seemed like too much of a get-up and I had so much work to do — but a minute before the crew left I decided to tag along. It was definitely worth it, we all had a blast hanging out and not worrying about work, and the resort gave us a free round of drinks.  Plus, we won one of the coveted golden conchs!

Some posing on the beach pre-Oscars:

Our days left on the island are ticking down!