A degraded grassland or a lush tropical forest: which holds more species diversity? The answer may not be as simple as you might think.

While most of ASA’s Fincas las Piedras property remains forested, some of it had been cleared of forest for agricultural purposes many years ago. This offers us the unique opportunity to explore distinctions in biodiversity between the two landscapes: what species, and how many, live in the grassland versus the standing forest? Ecological theory would suggest that more complex landscapes offer more niches and habitat variability, and therefore the intricacy of the forest system would support more species diversity than the comparative structural simplicity of the grassland. However, hard data is necessary to back up this assumption.

Because of course one cannot realistically sample the complete diversity within an ecosystem, we needed to narrow the scope of this study to just particular taxa. And with my particular passions, the choice was all too easy: herpetofauna, the reptiles and amphibians. Representing a suite of distinct ecosystem roles, herps would do well as the target fauna for this comparative study. Additionally, it is feasible to identify much of the Western Amazonian herpetofauna to the species level—something that would prove difficult if, say, Coleoptera (beetles) had been chosen. One of the prominent difficulties with reptiles and amphibians, however, is finding and catching them; many species are adapted to be incredibly cryptic, or are strictly nocturnal. How to go about this? One possible method is the use of drift fences.

Strips of mesh material, propped up with wooden stakes, are buried in the sediment, with buckets sunk into the ground at each end of the fence. The mesh is deep enough to prevent fossorial (adapted for life underground) creatures from digging underneath, but tall enough to prevent cursorial (adapted for free movement/running) organisms from climbing over. If a terrestrial animal wished to cross to the other side, it would therefore need to go around the fence—and would promptly fall right into a bucket waiting for them. Easy pickings!

We set out on to design, construct, and monitor our set of drift fence arrays: two staked out in the interior forest, another two set in the adjacent grassland, and a final two placed along the border of these two ecosystems. But we did have our concerns: would the buckets become flooded from the rains? Will small rodents chew through the mesh fences? After all of our efforts, will we actually catch anything at all?

But early success vanquished our qualms. On the very first day after our initial fence was completed, we were presented with an exquisite surprise: a giant blindsnake, Typhlops reticulatus! This worm-like serpent lives almost exclusively under the soil, feeding on termites and ants, and it is a species rarely seen—a first on our property. What a great start to have!

Of course, the drift fences faced many trials and tribulations. Yes, the buckets would frequently flood with the rains, and yes, the mesh fence material would occasional have a hole chewed through it (but actually by crusading leaf-cutter ants, not mammals!). Despite these setbacks, we still collected enough specimens to offer a potential image of herpetofauna diversity in the forest versus grassland habitats.

As expected, the forest interior possessed the highest number of reptilian and amphibian species, totaling 12 species from 9 distinct families. The grassland, conversely, only held 5 species from 3 families. But of note is that the grassland traps captured almost twice as many specimens as the forest traps had. Is this a surprise? No, in fact, we expected a higher abundance of herpetofauna in the grassland. Those species that were found in the grass were generalists—organisms that can easily adapt and thrive in a variety of different niches. The vast majority of specimens collected in the grassland were Amazon racerunners, Ameiva ameiva. These colorful, extremely quick lizards are somewhat sparse within the forest, but with plentiful sunlight to accelerate their metabolism, they enjoy the openness of the grasslands. Where most species of moisture-reliant frogs and slow-moving snakes cannot persist, such generalists have fewer competitors and predators, and take over the terrain with a population explosion.

There is still much to be done with the drift fences. Because the arrays are indiscriminate in what they capture, complementary studies of mammalian and invertebrate diversity could also be conducted with the same arrays. But for Nature Dave, frogs and lizards are all that is needed. 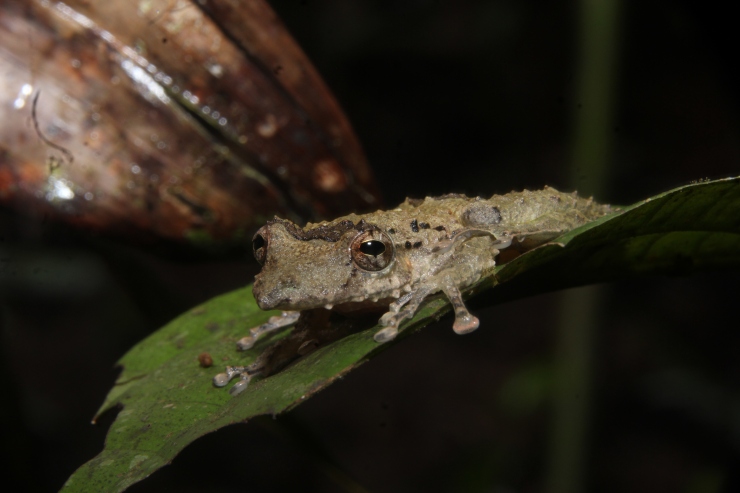